This team continues to round into form and get better every week. Under the leadership of Coach Troy Bierbaum this team notched a major accomplishment this past weekend. The Pirates enjoyed their first winning weekend of the season by posting 2-1 record.

Their lone loss was in the first round against eventual Tournament Champion, Rogers. Coach Troy agonized over that game because the Pirates held a seven-point lead with just over three minutes left in the game. I attempted to dig even deeper into that collapse, but he Popovich’d my request and just walked away from me.

In the next two rounds, the Pirates were able to sneak by Elk River and then dominated Rockford to earn themselves medals as the Consolation Champions.

The team is looking forward to competing in the State Tournament to see what they can do next. 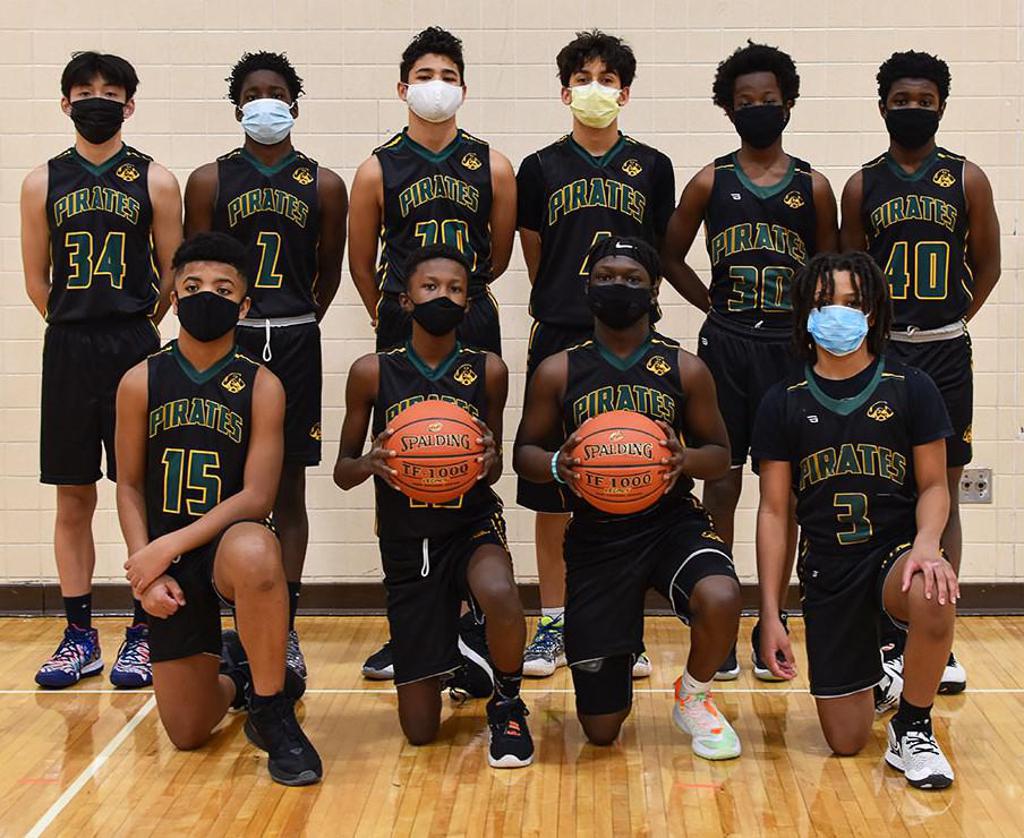 With a lot of new faces in the program, the 8th grade boys’ “B/C” team has probably faced more of an uphill battle then most of our teams in our program considering all the circumstances surrounding this year. However, they competed and were in every game until the very end in all three of their games this weekend in the Blaine tournament. They nearly pulled out an OT thriller against Bloomington Jefferson, but just could not close the deal at the end.

Veteran Coach Troy Bierbaum (and future PCTBL Hall of Famer) is still trying to find the right balance and right mix to maximize the talent he has on this roster. By the end of the year, they will still be a tough out in the State Tournament.

The Pirates 8th grade boys “B/C” took a step up in the level of competition they faced this weekend by playing in a “B” pool.

Although the Pirates lost all three of their games, Coach Troy thinks the team is headed in the right direction and was encouraged by them making proper in game defensive adjustments during their match up versus a great offensive transition team in Delano.

The Pirates were able to collectively buy in to committing to limit Delano’s transition opportunities by everyone hustling back and making Delano earn their points in a half court set. Pirates still ended up falling short, but positive strides were made this past weekend.

The 8th grade boys’ “B/C” team is making some strides folks. The results have not always been there for this squad so far this season, but it is not due to any lack of effort or attitude issues. They compete from tip to whistle on every possession in the game.

The team posted a 1-2 record this weekend. They fell short to both Mahtomedi and Wayzata but bounced back with a big win over rival Champlin Park by the score of 28-24.

Coach Troy was ecstatic with the team’s overall effort throughout the weekend, but really felt good for his players to get a much-needed win under their belt and to finally be rewarded for the effort they are putting forth every week.

My close, personal friend Coach Troy hit on a lot of individual positives in our interview, so we are going to pay homage to Sid Hartman to recap their weekend:

Pirates played great team defense all weekend including holding a tough Wayzata team to only five first half points. In the win against Champlin, Idrian Misiani and Sabastian Boyd led the scoring effort. Birthday boy Marquavius Hinds did a great job running point and getting the team into their offense. Although under-sized, both Kaden Flemmons and Runey Parker played big and held their own against the Champlin front line. Shawn Zelee, Jarvis Kaykay and Tijon Lopez-Starr continue to play lock down defense. Jordan Yang and Chris Nyakwama had quality minutes coming off the bench with no turnovers and had key rebounds.

The Pirates came out of the gates hot at Prior Lake by winning their first two contests (to help extend a season high three-game winning streak), but eventually fell short in the next two games against quality opponents: Owatonna (finished 1st place) and Lakeville North (finished 3rd place).

Coach Troy feels like this team is finally gaining some traction on their identity as a team. The effort level has never wavered on this squad, but the execution in game plans has improved dramatically and they are starting to see the fruits on their labor.

These feisty Pirates continue to battle and are earning respect with everyone they play against. The Park Center team notched a 2-2 record on the weekend. There was some disappointment that they could have done a little more to help their path, but all in all it was another good showing for the club.

Coach Troy was impressed with their overall game against Shakopee in the Consolation Championship even in defeat. He feels the offense is going in the right direction. The ball movement was crisp, and the players are starting to trust more and be accountable to one another.